Lamont Marcell Jacobs is an Italian-American track and field sprinter and long jumper. He won the 100 meters event at the 2020 Summer Olympics in 9.80 seconds, setting the new European record in athletics in the 100 meters category.

Lamont Marcell Jacobs, Jr was born on Monday, September 26, 1994 (age 27 years; as of 2021), in El Paso, Texas, United States. When Jacobs was three weeks old, his father, a US army soldier, was transferred to South Korea. Jacobs and his mother moved to Desenzano del Garda, Province of Brescia, Lombardy, Italy. 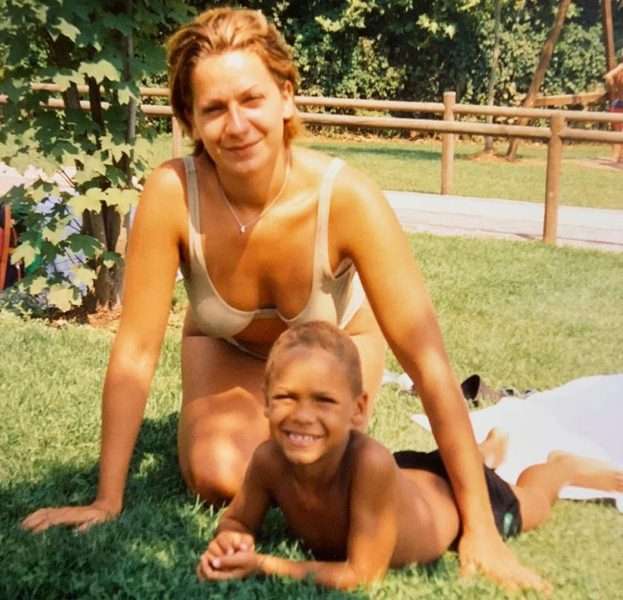 A childhood picture of Lamont Marcell Jacobs with his mother

He started his sports career playing basketball and football, and he trained in football under Adriano Bertazzi. When Andriano noticed his speed, he suggested Jacobs try sprinting. According to Jacobs, Bertazzi said,

He then began training under Gianni Lombardi, the director of the World Athletics Challenge – Combined Events, in Desenzano del Garda, which soon brought out his talent in sprinting. At the age of ten, he began competing in sprinting, but only discovered the long jump in 2011. In September 2015, he began training under the 2001 world indoor triple jump champion Paolo Camossi; at first, he trained in Gorizia, and then in late 2018, he trained in Rome. Talking about Paolo in an interview, he said,

I achieved good results during the three years I spent in Gorizia, but I felt I needed more regular medical and physiotherapy support. Rome offered everything I needed, so it was the right choice for me. I am really grateful that Paolo Camossi decided to coach me. He changed his life completely to follow me.” 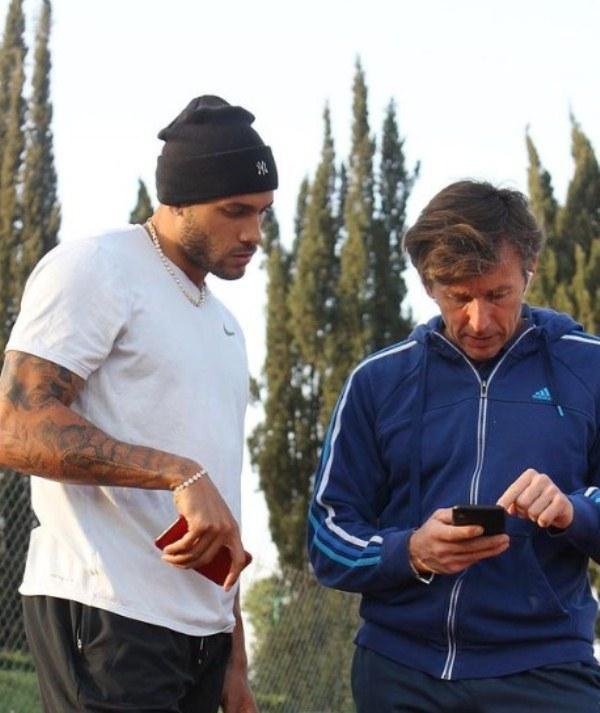 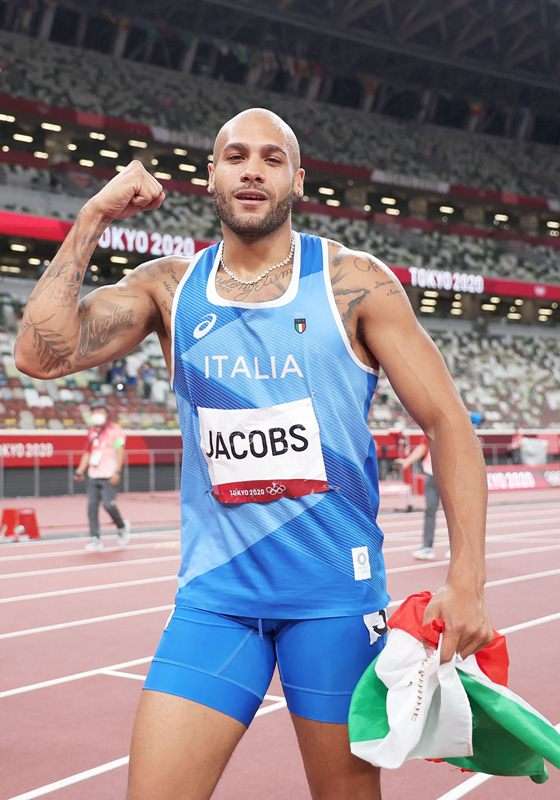 His mother, Viviana Masini, is an Italian. Her mother owns Hotel Florence in Italy. His father, Lamont Marcell Jacobs Sr., is an African-American. His father, at age 18, was serving as the United States Army soldier at Caserma Ederle (a military complex) in Vicenza, Italy, when he met his mother, aged 16. His parents got married in Italy and relocated to El Paso, Texas, where Jacobs was born three years later. When he was six months old, his parents decided to separate. He was raised by his mother alone. His mother talked about their relationship in an interview and said,

Ours is a great love. I am his mother, sister and friend, as well as his great sponsor. I accompanied him to the races every Sunday, encouraged him to give more, remaining humble. The time to get noticed has finally come.” 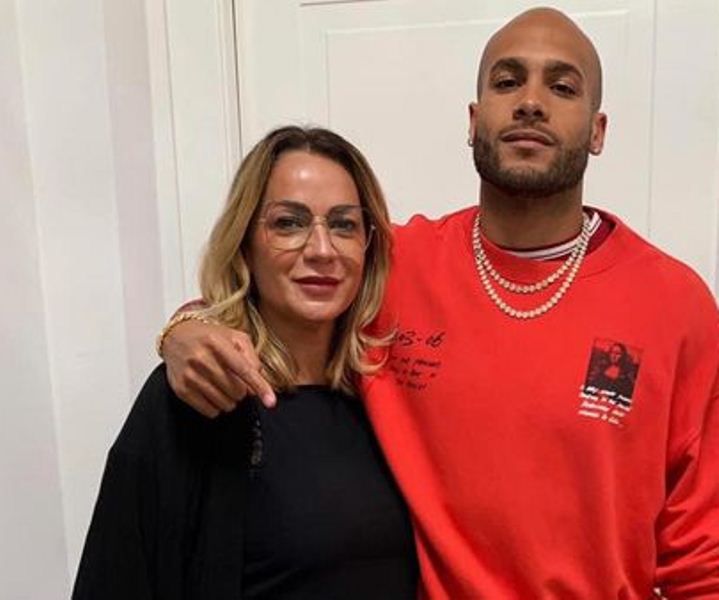 Lamont Marcell Jacobs with his mother

Although he was born an American, he identifies himself as an Italian. In an interview, he said,

Translation: Only my muscle fibers are American, I’m 100% an Italian.”

He also acquired Italian citizenship later in his life. Since childhood, he was estranged from his father. Upon a suggestion from his mental coach, Nicoletta Romanazzi, he reestablished his relationship with his father, which, as cited by his coach, would have helped him be motivated and give him the peace of mind he needed to focus on winning in the Olympics. Talking about his relationship with his father and their reunion in an interview, he said,

I considered him a stranger, he looked for me on Facebook and I didn’t answer. Fortunately, recently, also thanks to the work with my mental coach, a relationship has been recreated. And I’ll go and see him in the U.S.”

When he was nineteen, he was in a relationship with a girl, and with her, he shares a son named Jeremy (born in 2013). He then dated a woman named Nicole Daza, who is a model and social media influencer. In 2018, Marcell and Nicole got married. The couple lives in Rome with their two children, a son named Anthony (born in 2019) and a daughter named Meghan (born in 2021). 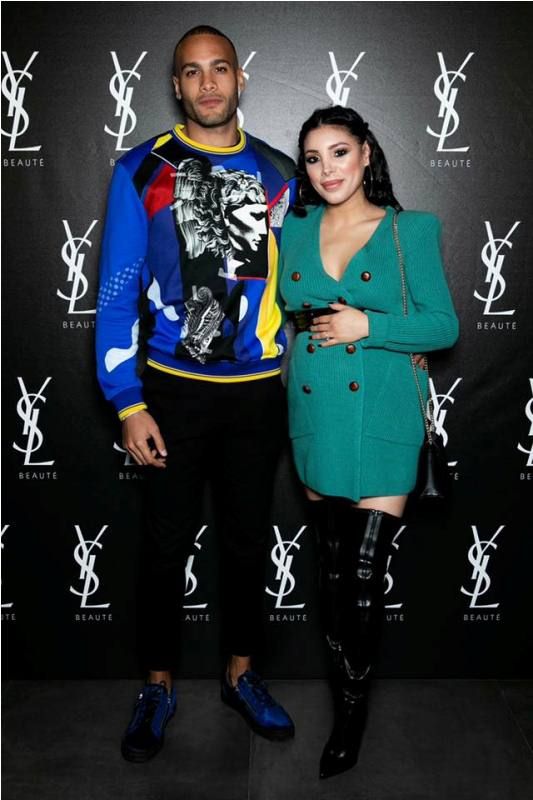 Lamont Marcell Jacobs with his wife 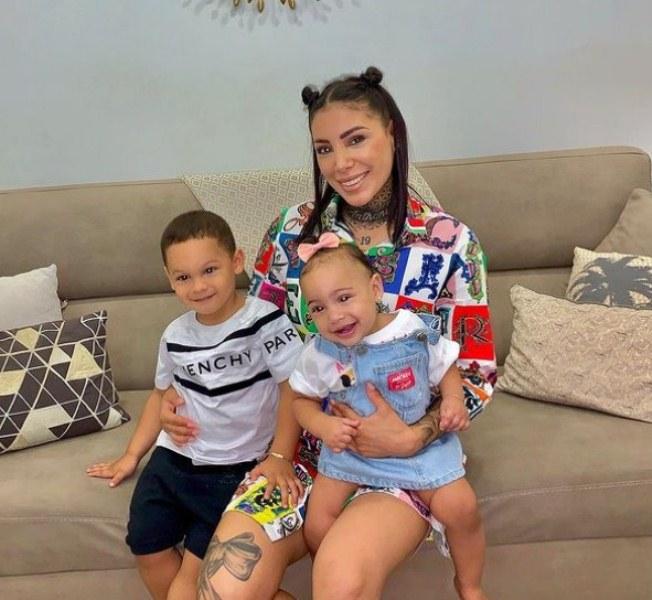 Lamont Marcell Jacobs’ wife with their children, Anthony and Meghan 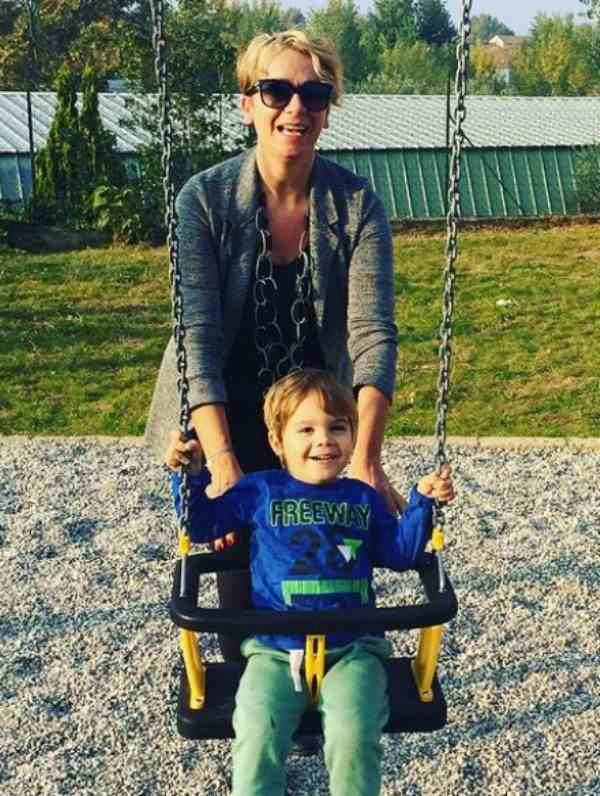 He is a follower of Christianity.

At the 2016 Mediterranean Athletics U23 Championships, held in Tunis, he won the long jump event by jumping 7.95 m.

In the 2017 Europeans Indoor Championships held in Belgrade, he jumped 7.70 meters in the quarterfinals and lost. 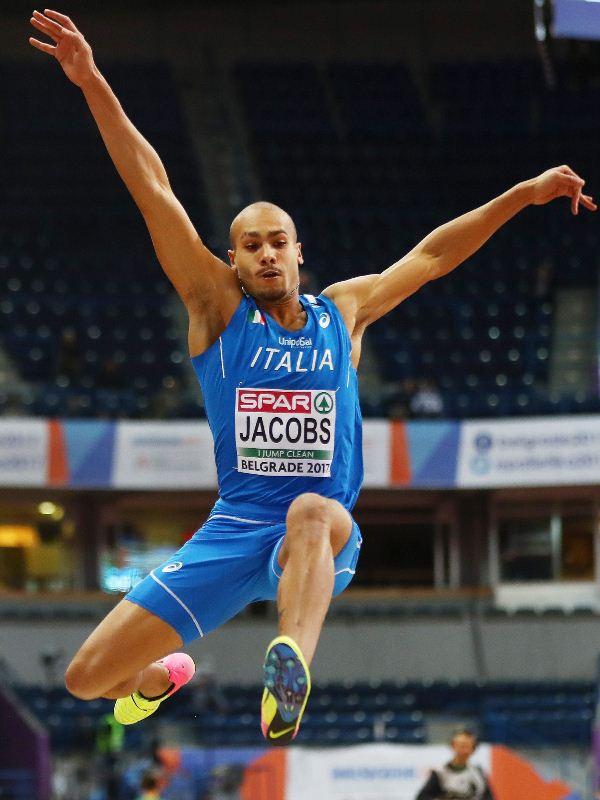 In the championship’s 2019 edition, which took place in Glasgow, he went to the quarterfinals but lost.

At the 2018th edition of the European Athletics Championships, he excelled to the semi-finals at the Men’s 100 m event timed at 10.28 seconds. In 2019, he decide to focus solely on sprinting, and he gave frequent injuries caused during long jumping as one of the reasons for it. In the 2019 IAAF World Relays, he participated in the Men’s 4 × 100 meters relay, held in Yokohama, Japan, but he did not complete the race. In July 2019, he lowered his personal best of 100m to 10.03 seconds, becoming one of the three fastest Italians in history. At the 2019 European Athletics Team Championships Super League, held in Bydgoszcz, he won a silver medal by competing in the 100 meters event at 10.39 seconds. At the 2019 World Athletics Championships, held in Doha, he competed in the 100 meters and 4 × 100 meters relay events and went to the semi-finals. In the semi-finals of the 100 meters event, he completed in 10.20 seconds. In the 4 × 100 m relay event, as a part of the Italian team, he contributed to the 38.11 seconds record of the team. 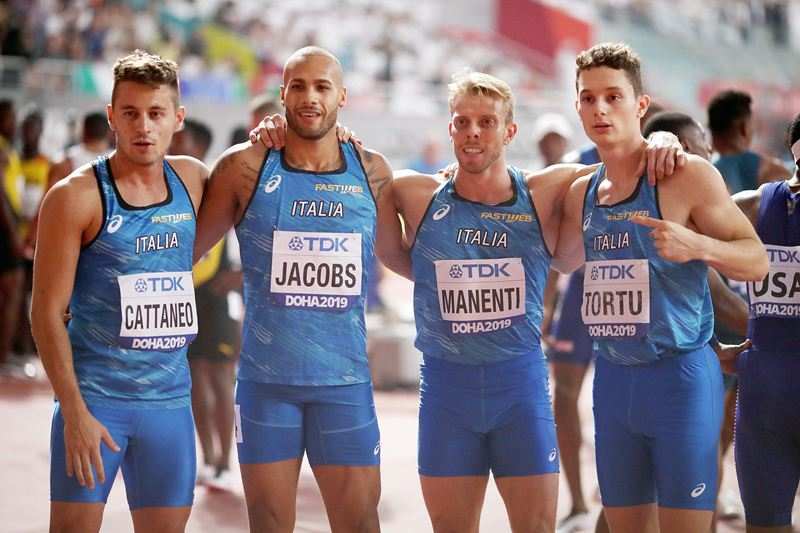 Due to a hamstring injury, he did not participate in the 2016 Summer Olympics held in Rio de Janeiro, Brazil. He participated in 100 meters and 4 × 100 meters relay events at the 2020 Summer Olympics held in Tokyo, Japan; the Olympics were postponed to 2021 due to the worldwide Coronavirus Pandemic. In the semi-finals of the 100m event, he came in close third timed at 9.84, which became the European record-equalling 1996 champion Donovan Bailey for #14. He qualified finals along with the Akani Simbine of South Africa. In the finals of the 100 meters event, he had a clear win timed at 9.80 seconds, marking his second improvement in the European records and tying with Steve Mulling (#10 of all times). He won the gold medal, bringing in Italy’s first gold in the 100 m event. 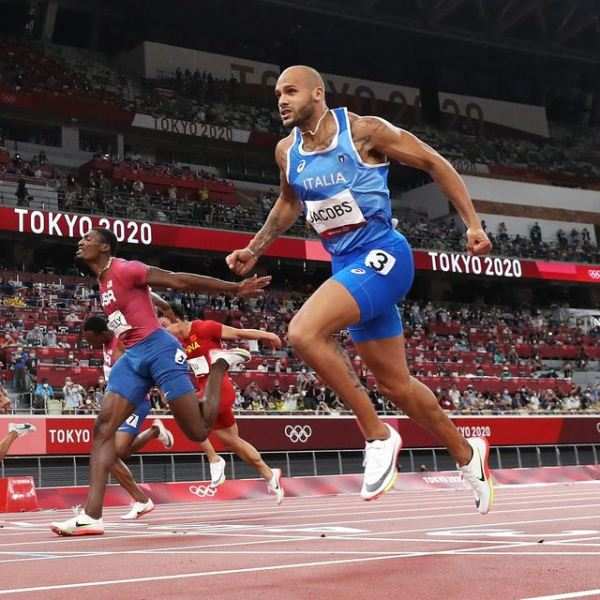 At the 4×100 m relay, as a part of the Italian relay team including Lorenzo Patta, Fausto Desalu, and Filippo Tortu, Jacob ran the team’s second leg contributing to its total run time of 37.50 seconds, which became the new Italian Record. The Italian team won, marking Italy’s first win and medal earned in 73 years in the event. 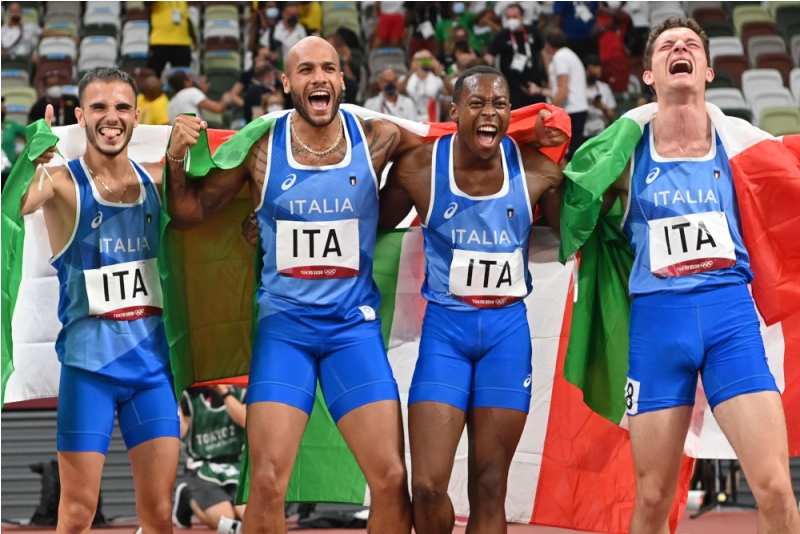 Due to his outstanding achievements, he was chosen to be Italy’s flag bearer by the Italian National Olympic Committee during the Olympics closing ceremony. 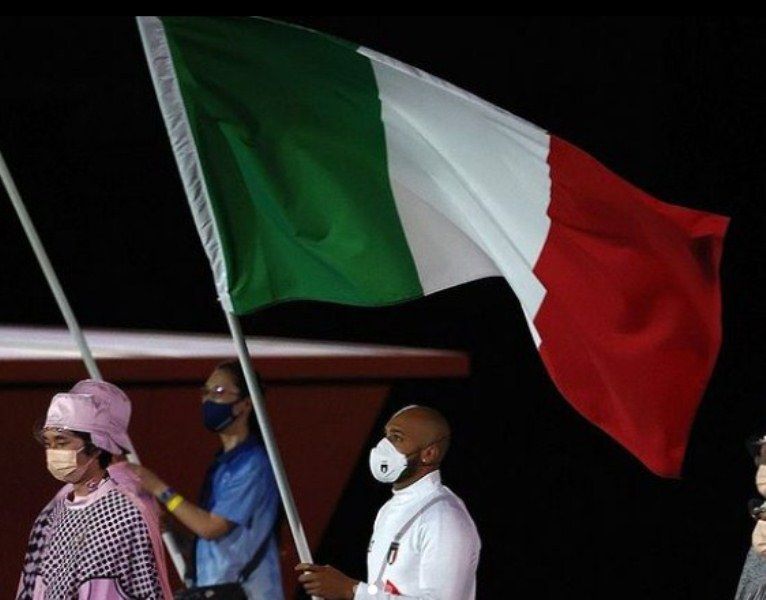 At the 2021 BAUHAUS-galan, an annual international meet and part of the Diamond League circuit held at the Olympic Stadium in Stockholm, he participated in the 100 meters event. He won second place timed at 10.05 seconds. 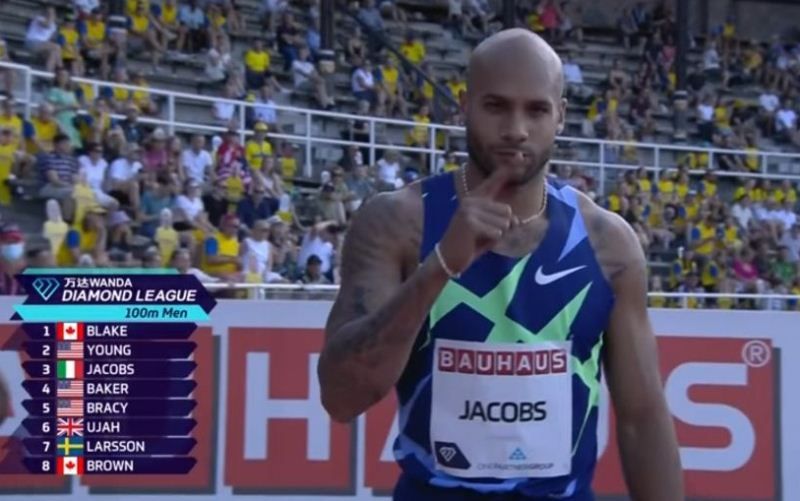 Lamont Marcell Jacobs at the 2021 BAUHAUS-galan

In 2021, after Lamont broke the 10-second barrier at the 2020 Tokyo Olympic finals in the Men’s 100 meters category, there were suspicions of him being under the influence of steroids. The British daily The Times ran a story about Jacobs’ former sports nutritionist, Giacomo Spazzini, being under police investigation in an alleged illegal distribution of anabolic steroids. After Spazzini was accused in the matter, Jacobs cut his ties with Spazzini, and his manager told the media outlets that Jacobs had worked with the medical professionals at his sports center, and Spazzini was not his nutritionist. While talking about the allegations, he said,

It haven’t touched me because I know all the sacrifices and setbacks I took to get to this moment, and I want to enjoy it 100 percent.” 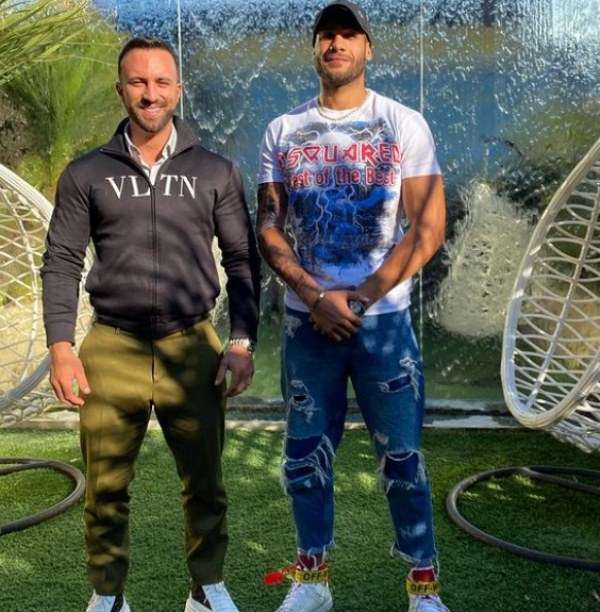 When he was asked about his stance on the suspension of British sprinter C.J. Ujah (silver-medal winner in the 4x100m relay event at the 2020 Tokyo Olympics) over an alleged anti-doping breach, he said,

It makes me smile a little. Because a week ago they said so many things about me that were not true, and they have the relay runner with a positive result in their own backyard.”